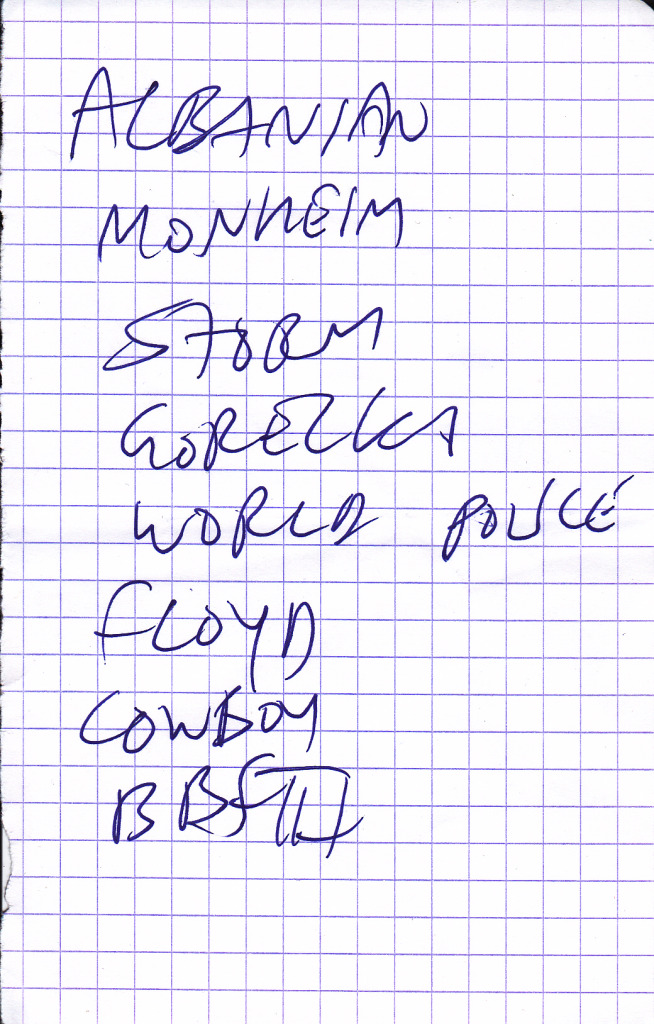 by Godspeed You Black Emperor!

Notes:
The sound was very loud this night, almost too much to get a good recording. But it came out quite good. And Grigio managed to improve it even more. Included is a scan of the setlist, provided by oo3i.
Support act Total Life was not attended, nor recorded.

Reviewer: Matazzrazz - favoritefavoritefavoritefavoritefavorite - February 6, 2011
Subject: One of the best Godspeed live recordings I've heard!
I don't think I'm out of line to say that this is truly an astonishing recording - indeed to my ears one of the best live recordings of Godspeed I've heard, and I have sampled quite of few of those! Yes it is a bit bassy and the sound does get a bit muddled at times, but for portable recording standards the sound is incredibly good! I also saw Godspeed thrice (!) at the ATP festival - a different venue with a different sound, I know - but I think this recording captures extremely well the overall atmosphere of Godspeed performances, and the band themselves seem to be in pretty good shape here.
This recording has encapsulated so very well the sound of this tour and my guess is it will become a classic bootleg essential for Godspeed fans.
Heartfelt congratulations to the gentlemen who recorded and mastered this gig! A job fantastically well done!
Reviewer: tunic - - January 26, 2011
Subject: re: tags
sorry about those tags eloo. I mistakenly copied some info from a previous upload when I was filling in the data for this set. I did correct it already, but apparently the audio files must be derived again. I will do that shortly.

The performance itself is stellar, pretty much a dream, setlist, from the opeing rage of Albanian, through sleep into the majestity of Storm, after which, as far as I cared, the night was already perfect.

Following it with Moya and Static only made things better, and closing off with a rousing performance of BBF3 made for a perfect night.

And yes, the speech in BBF3 is slower then on Slow Riot.